Taoism (also spelled Daoism) is referred to a philosophical or religious tradition which has a profound influence in Chinese culture. When talking about Taoism, most westerners often refer to the works of Lao Tzu and Chuang Tzu. Those works might seen as philosophical one, rather than religion, as they include nothing about gods and worship. The relationship between Philosophical Taoism and Religious Taoism is complex, but the two are intimately related. Here we pay more attention to Religious Taoism.

Religious Taoism holds longevity and immortality as its highest object of faith. It also focus on religious practices, incuding exorcism, alchemy and a wide set of popular beliefs. Moreover, Religious Taoism has the gods of the Town, Land, Kitchen, Door, and Wealth. At the head of these gods are the Supreme Patriarch Lao Tzu and the Jade Emperor. These gods are enshrined in Taoist monasteries and temples. The God of Wealth, called Marshal Zhao, is believed to bring fortune to people. The God of the Door, on the other hand, is supposed to keep away demons, while the God of the Kitchen is in charge of every household's good fortune and misfortune. The popular fairy tale "The Eight Immortals Crossing the Sea (八仙 过海)" has its origin in Religious Taoism. 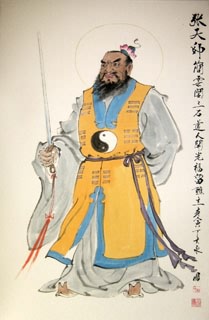 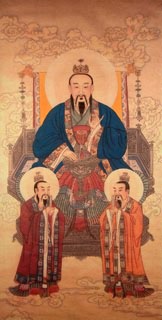